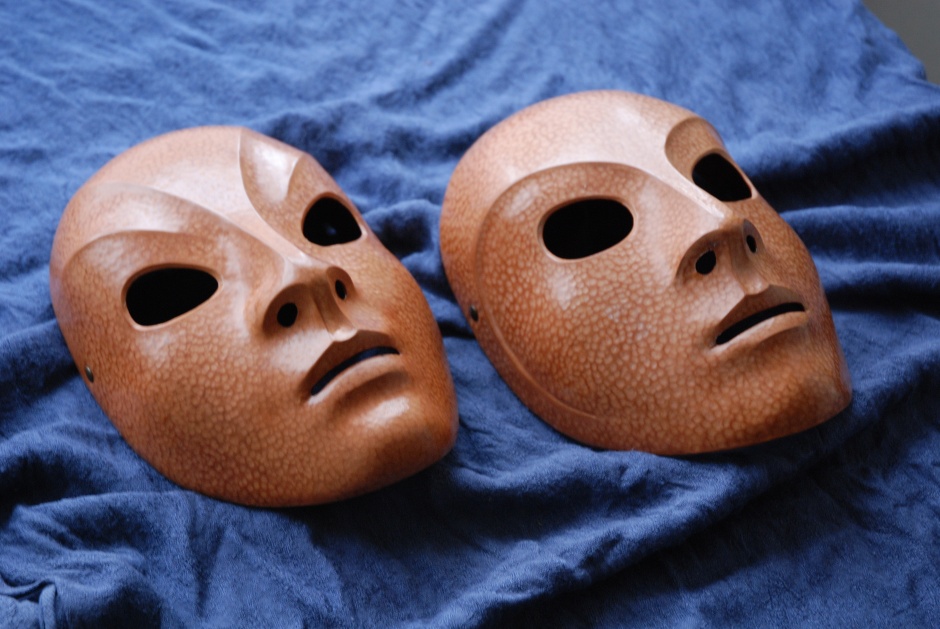 Structural Integration (Rolf Method): a process of bodywork which unfolds old movement patterns, brings structural balance and ease through alignment with gravity. This method has a strong connection with Feldenkrais, The Alexander Technique,

The Neutral Mask: a training tool in physical theatre, developed by Jacques Lecoq and Amleto Sartori, to show the underlying expression of body posture.

It is that moment when everything clicks and inside you there is a beaming “YES”. Sitting in Paris in 2009, this is the sensation that was flooding through my body, as I began to see the neutral mask unfold through the work of Giovanni Fusetti.

The Neutral Mask
Created by Jacques Lecoq & Amleto Sartori, the neutral masks, one male & one female, are training tools to bring stronger physical awareness. These leather masks which encapsulate the base features of the human face have the ability to show all emotions. 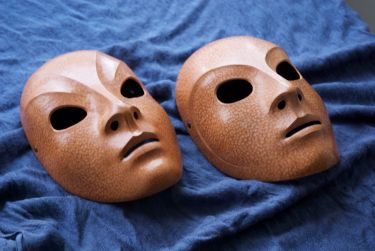 It was fascinating to see others wearing the mask. There was a distinct and different appearance for each person, even though they wore the same mask.“ – Sharon Usher

In this process different emotions and archetypes can be seen to arise which are clear to an audience. Through making small adjustments in posture, breath & focus what is shown on the mask begins to change. In some instances, by bringing the body into balance the expression on the mask can evaporate and the energy bubble of the performer expands. It is a fascinating process to witness.

“It’s an experience that makes you feel present. You have to be alert for it to work.” – Maria Hemeto

‘There are times when people let go of their individual tension and they disappear, in that moment it could be anyone behind the mask, there is a simple story being told without comment or opinion of the actor.” – Beth Twentyman

Our body of stories (Structural Integration)
It is clear that our bodies have a tissue memory. As Giovanni Fusetti would say from a Jungian principle “What is not expressed is impressed in the body”.

When working hands-on as a Structural Integration Practitioner, it is clear our body can hold different tension patterns, old emotions & experiences, which shape our movement & the way we see the world. In some cases when an injury has come from a specific event, such as whiplash from a road accident, the person may internally return to the sensations and scenarios when it first occurred, as the tissue begins to release. The body has the ability to remember, it is not just an experience of the brain.

Releasing old patterns no longer needed, Structural Integration creates options of movement; widening the possibilities, range of motion and vitality available to the body. Within this exploration, the neutral mask is a powerful tool for unfolding and sharing the stories within us.

One of the most beautiful things is “Neutrality” – the shared experience of being human. As a dear friend once said:

“Neutrality is the truth that all of us have, it is like smiling, we all know a smile, just as we all know the feeling that one song may give us.”- Irene Van Dijken.

It taps into the shared collective & provides a doorway to different parts of ourselves, which to a greater or lesser degree are within all of us.

“I am at the beginning of my exploration of the neutral mask and I can already see the power it can have to liberate, not just on stage but, by implication, in life.”
– Sharon Usher

Taking on a myriad of characters on-stage, the base posture of the performer off-stage became more ordered, versatile in movement & settled within gravity. It was as if we were going through the same unfolding process as the 10 Series. Fellow performers developed injuries at structural blocks ready to change, with subsequent strengthening, awareness & connection.

It is with no doubt that these disciplines are interlinked. Exploration through the neutral mask and other embodied theatre practices develops self-awareness and versatility as a human being. Whilst Structural Integration is not only a process for injury rehabilitation & postural stability but a catalyst in the physical development of the performer.

“There are three masks:
the one we think we are,
the one we really are,
and the one we have in common.”